Close Mobile Menu
Make An Appointment
Grass Valley
Lincoln
Browse by Page
Connect on Social Media
Home » Blog » Fluoride – What Is It and Where Does It Come From?

Fluoride – What Is It and Where Does It Come From?

Fluoride – What is it and Where Does it Come From? The use of Fluoride and your child’s oral health.

This is part one of a three-part series about Fluoride.  We’ll cover everything from what it is and where it comes from to how it is added to our water and oral health products, as well as a great guide to help you separate fact from scare tactics.

Fluoride is a naturally-occurring mineral which is found in all natural waters to some extent – both seawater and fresh water. It is the 13th most abundant element on the Earth’s crust; a chemical Ion of Fluorine.   Fluorine is the gaseous form; Fluorite the crystal form.  Both contain Fluoride.  Ionic minerals are more easily absorbed by the body than are Colloidal minerals, which stay in suspension in larger ‘clumps’.

Concentrations of Fluorine can be quite high in areas of volcanic or geothermal activity, such as natural hot springs.  Fluorine is often found in granite or limestone in its’ gaseous form. Deposits of Fluorite, the crystal form, can be seen as vein deposits or a series of layers in a rock void.

Fluoride is the main component of Fluorite (Latin, meaning ‘to flow’) a crystal form of Fluorine which melts easily.  In its raw state, it is extremely colorful; the most common variety exhibiting clear greens and purples. 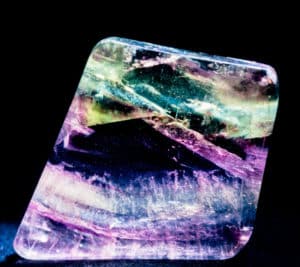 Ancient Egyptians used Fluorite to carve statues and scarabs – they thought it had magical power to aid in clear thinking and has been called ‘The Genius Stone’.  Today, Fluorite is used for carvings as well as jewelry.

Fluorite will glow, or fluoresce, under ultraviolet light.  It was one of the first substances in which the natural phenomenon of fluorescence was studied, and the term ‘fluorescence’ comes from its name.

Where do we get Fluoride for water, toothpaste and mouthwash?

Fluoride can also be synthesized in a laboratory.  Most of the Fluoride added to toothpastes and mouthwashes fall into this category.  Why?  It’s easier to control the chemical compound and strength by creating it under laboratory conditions.  Raw Fluorine can be very volatile; the synthesized version of Fluoride which is added to public water supplies, toothpaste and mouthwashes is much more stable.

Fluoride has the capacity to bind with many other compounds, making it relatively easy to use in water, as well as semi-solid materials such as toothpaste.  Sodium-Fluoride is most often used as an additive to toothpaste and mouthwash.  Calcium Fluoride is the primary compound found in natural water sources.  Sodium Fluorosilicate  or Fluorocilicic Acid are the most commonly used compounds in municipal water supplies, as they are readily available and less expensive to manufacture. 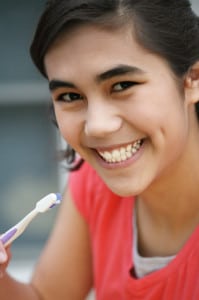 Who ever thought of using Fluoride to prevent cavities?  Next month, we’ll discuss how Fluoride was discovered and what led to its’ use in water supplies, along with the most up-to-date information on its’ safety and efficacy.

Everything You Need to Know About Gum Disease
October 27th, 2022

Is Your Fitness Routine be Harming your Teeth?
October 13th, 2022

How to Throw a Healthy and Fun Birthday Party
September 27th, 2022