The Benefits of Adding Fluoride to Drinking Water

A town filled with brown teeth
In 1901, a young dentist named Frederick McKay opened his first practice in Colorado Springs, CO.  He was shocked to find a huge number of people with dark brown stains on their teeth.  Local residents had many explanations for this phenomenon, none of which were based in science.  Everything from eating too much pork to drinking too much milk was blamed.

When Dr. McKay realized that almost 90% of the town’s children were affected, he began to search for a communal source.  Enlisting the assistance of renowned dental researcher, Dr. G.V. Black, he started to investigate. The two discovered that although the brown teeth were unsightly, their owners seemed impervious to dental decay.  Drs. McKay and Black suspected something in the town’s water supply was the cause, but they were unable to prove their theory.  Although they tested the water for known substances, the tests were limited, and revealed no information.

The discovery of a similar problem in Oakley, Idaho gave these researchers another clue.  In 1923, they were asked to investigate the sudden incidence of people developing brown teeth.  They discovered that in recent years Oakley had constructed a communal pipeline from a local spring.  McKay recommended that the town stop using this as a source of water.  Within just a few years, children who were erupting secondary teeth had no discoloration.

McKay and Dr. Grover Kempf of the U.S. Public Health Service were soon called to another small town, this time in Arkansas.  The residents of Bauxite had the same tooth discoloration.  They found it curious that children living in the town were severely affected by the discoloration, yet those living in a town only 5 miles away had no problem.  Again, the children in Bauxite, just like those in the Idaho and Colorado towns, had very little tooth decay.

Coincidentally, ALCOA’s headquarters were in Bauxite, and the chief chemist, H.V. Churchill, had a sophisticated laboratory.  Drs. McKay and Kempf published their findings and asked Churchill to test samples taken from the town’s water supply.  His results were surprising:  the water had high levels of Fluoride.

In fact, Churchill was irate because he thought the samples were ‘contaminated’.  At the time, no one had heard of naturally occurring Fluoride in water.  The results were strongly disputed and Churchill insisted on a second test. It was reported that his assistant received the brunt of his rage since Churchill assumed the hapless man had mishandled the samples. The second test yielded the same results – levels of Fluoride were quite high.

By the late 1930’s, a chemist for the National Institute for Health, Dr. Elias Elvove, had developed an accurate method to measure Fluoride levels in drinking water. Along with his co-worker, Dr. H. Trendley Dean, they set out to prove their hypothesis that even small amounts of Fluoride would prevent dental decay without causing fluorosis (the brown tint).  They tested Fluoride levels until they found the lowest level that still had cavity-preventing properties.

Their theory proved to be true after a 15 year project in which minute amounts of Fluoride were added to the drinking water in Grand Rapids, Michigan.  The caries (cavity) rate among children born after the inception of the project was 60% lower. 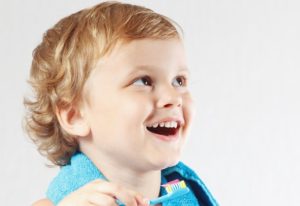 Fluoride, when added to water supplies, has reduced the incidence of cavities by 50-55% over the last 50+ years.  This is significant, especially when you factor in the huge increase in sugar consumption since 1960.  We consumed 62% more sugar per person in 2013 than we did in 1960, yet in areas with water supplies to which Fluoride is added, the cavity reduction has remained constant.

Dental science has proven over the years that Fluoride will harden tooth enamel after an exposure to acid in foods and will inhibit the bacterial growth which causes cavities.  Many Pediatric Dentists recommend treating their patient’s teeth with a Fluoride ‘lacquer’ or sealant, to prevent cavities – especially in those patients who seem at greater risk of developing tooth decay.

Some municipalities, such as Nevada County, have opted to stop adding fluoride to drinking water.  Like most preventive substances, too much can be detrimental.  If your child uses Fluoride toothpaste and Fluoride mouthwash, receiving it in the water supply might simply be excessive.  In all cases, it is best to check with your Pediatric Dentist to discuss your child’s unique needs.

How to Have a Cavity-Free Christmas
December 13th, 2022

What is Baby Bottle Tooth Decay, and Can I Prevent it?
November 27th, 2022