The History of the Toothbrush

‘Find a wild boar.  Ask it to hold still while you pluck the wiry hairs from its’ neck. Then attach them to a stick and rub your teeth vigorously for 30 seconds.’

Of course there was no instruction manual for making a toothbrush in 15th Century China.  The Chinese used boar’s bristles attached to a bone or bamboo handle for their dental hygiene.  The wiry hairs were good at cleaning, but may have removed some of the users’ enamel as well.  In Europe, those who wanted clean teeth opted for softer horsehair bristles. Even feathers had a brief appearance as toothbrush bristles, but they likely didn’t get the job done.  A mouthful of feathers may not have been very appealing, either. The history of the Toothbrush and getting teeth clean is filled with trial and error while people struggled to find the most effective methods. 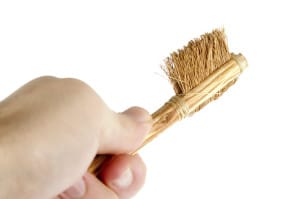 It seems that people have always been preoccupied with their oral health, or at least wanted to remove food from between their teeth.  Excavations around the world have uncovered animal bones and porcupine quills which were clearly used much like todays’ dental floss picks.

The predecessor to the toothbrush was designed around 3500 B.C. Egyptians and Babylonians used ‘chew sticks’ – twigs with frayed ends – to brush their teeth.  These have been found in tombs unearthed where ancient civilizations lived and prospered.  In fact, the use of chew sticks is still common in parts of Africa, the rural Southern U.S. and in certain Islamic sects.

Chinese toothbrushes were brought to Europe by sea traders, and became popular in the 17th Century.  One of the earliest accounts of a toothbrush purchase was found in the autobiography of Anthony Wood, an antiquarian from Oxford, England who wrote that he had paid a J. Barret for a toothbrush in 1690.  Mr. Wood was, by all accounts, in interesting fellow.  It is reported that his hobbies included ploughing, bell-ringing and playing the violin.  Although he was described to have uncouth manners and a rumpled appearance, he evidently took his oral health seriously.  He lived to the ripe old age of 63, presumably with all his own teeth.

Around the time of Woods’ demise, Europeans, likely spurred on by the desire to keep their enamel intact, began to manufacture toothbrushes made with horse hair.  These softer-bristled models gained in popularity until 1780, when William Addis of Clerkenwald, England decided to produce a more modern toothbrush.  Mr. Addis certainly had plenty of time in which to perfect his craft; he was imprisoned for causing a riot in 1770, and while there developed a prototype.  He convinced one of his guards to supply him with some bristles, which he tied in tufts and inserted in a piece of animal bone left over from his dinner (since meat wasn’t typically served in English prisons, it is presumed the bone was that of a rat). He drilled small holes in the bone, pushed the bristles in and sealed them with glue.  Upon Woods’ release from prison, he began to manufacture toothbrushes and became very wealthy.  When he died in 1808, he left the company to his eldest son.  Wisdom Toothbrushes is still in business today, manufacturing over 70 million toothbrushes per year.

Europeans, tired of using salt and a rag to rub their gums, took quickly to the toothbrush, making it one of the most popular purchases in the mid 1800’s.  Owning a toothbrush was considered the height of fashion – and if you could afford an expensive one made with badger hair, you were the envy of all your friends.

It wasn’t until 1857 that someone thought to file a patent for toothbrush design.  Dr. Hirum N. Wadsworth of Burlington, Vermont, attended the Baltimore College of Dental Surgery (coincidentally, the first dental school in the world).  His design was considered quite advanced, but it incorporated animal bristles, which unfortunately tended to hold bacteria and almost never dried out between brushings.  In spite of Dr. Wadsworth’s urgings in his 40 years of dental practice, teeth brushing didn’t really catch on in the United States as a daily routine until after World War I.

In the beginning of World War I, the War Department discovered they had an enormous hygiene problem, exacerbated by the huge numbers of men living in close quarters.  Soldiers were infested with lice, had rotten teeth, and spread germs like wildfire. In order that they stay alive at least long enough to arrive on the front lines, hygiene orders were enforced.  A soldier was required to bathe at least weekly and brush his teeth daily.  Unit commanders were expected to inspect and enforce these orders.  The brushes were supplied to the troops by Wisdom Toothbrushes.

By the time some of these soldiers began to arrive home, daily teeth brushing had become a habit.  In 1938, DuPont Corportion began manufacturing synthetic bristle toothbrushes.  Nylon yarn was used along with molded plastic handles.  It was advertised as ‘Dr. West’s Miracle Tuft Toothbrush’.  DuPont claimed it was sealed in glass, waterproof, and guaranteed for a year. They cost between 9 and 19 cents apiece.

After World War II, during which the hygiene rules from 1918 were strictly enforced, soldiers returned home with their own teeth and, we assume, good breath, for which their wives were undoubtedly thankful.  By that time, nylon bristled toothbrushes were commonplace in the United States, and the only choice you had to make was the color of the handle.

In 1954, the first electric toothbrush, called the Broxodent, was invented in Switzerland.  The Broxo OraBrush is still owned by Swiss Healthcare Solutions.

By the mid-1980’s, toothbrush manufacturers were marketing many styles of bristles and handles, all designed to make the job easier and more efficient.  Reach developed an angled head and contoured bristles during this time which is still in use today.

Is there room for even more improvement?  An internet-enabled toothbrush will be available globally starting this June, offered by Proctor and Gamble.  Connected to your smartphone, this brush records your brushing habits and gives mouth-care tips to the user.  No more guessing about the length of time you brushed.  Along with socks which track your running form and connected water bottles that measure your water consumption, you’ll be able to make small changes in your oral health habits before problems arise.

The best method for getting the most out of your brushing?  Your dentist can give you the latest information on how to brush and floss for the best results.   Regular checkups for you and your children are still the best prevention.

« Should I Be Concerned About BPA in My Child’s Mouth?
Helping to Understand Autism »

To request an appointment, please call us at (530) 270-0303 or click on the button below to provide your contact information and preferences for the day and time of your appointment.

Questions to Ask at a Back-to-School Dental Visit

What Did My Dentist Just Say?

Enter keywords into the field below to find what you're looking for.